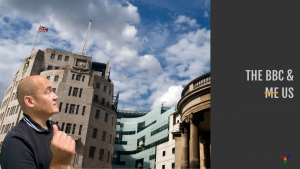 The BBC – something to celebrate?

👁️I’ve been watching the BBC since I was very young indeed. Actually, I’ve been “taking it in” since I was seven, when I had complete control over the telly.

🎙️ Auntie Beeb is a primary reason why I’m fascinated with communication and the way people engage through words, pictures, body language, music, physical prowess… and probably much more besides.

🎈 What’s more, I’m a sucker for anniversaries. Largely because I’m probably more nostalgic than I should be.

📻 And now, after quite a few years of producing my own stuff out in the wide (business) world, trying to work out what I’ve really got to contribute, I’ve realised that what I’ve loved most (outside of my own personal bubble of family, friends and all that jazz) is rather fortuitously what I’ve come to be best at…

📢 Communicating. And understanding how and why others do so.

That’s what the BBC does, isn’t it?

So I thought I’d blog about it. And vlog too. Exploring, discovering, conjecturing and, hopefully far more importantly, questioning. You, mostly because I’d like to know what you think of possibly the most influential – pound-for-pound – communication entity in the Western World, maybe even on the whole goddam planet (though I think 1.3 billion China-inhabitants might have a word or many to say about that).

I’ll come up with more questions as we career along this curious highway but for now, I have your starter for 10 (a little controversially, the fellow nerds of you will see I’ve namechecked an institution that was produced for both the BBC and The Other Side 😉).